PJ Harvey: my new music discovery, is actually someone who’s been on the scene for quite awhile and who I’d heard of, but never checked out.  In my recent wanderings around YouTube, I found her.  She’s a darling of Brit music critics, and I can’t say they’re wrong.

This is one of my favorites, a performance in 2004 of “Good Fortune:”

The 2001 Big Day Out festival in Sydney,  has her live solo rendition of “Rid of Me,” an amazing rocker of a performance with just her vocals and electric guitar:

PJ Harvey is definitely one of my favorites!

Tomorrow I go back to my alma mater, The Ohio State University, to take Intro to Medieval Lit as an over-60 auditor in Program 60, which allows Ohio residents over the age of 60 to take classes, not for credit, totally for free.  Well, except for having to buy a parking pass. The great thing about auditing a class is that you don’t have to write the papers or take the exams.  What’s not to like?

I majored in English lit as an undergrad at Ohio State back in the day.  But recently I got interested in medieval stuff both from watching the first four seasons of Vikings! on the History Channel, [ see my post Vikings! ] and then doing a LOT of reading about the Viking Age, which took place from the late 8th century to the mid-11th century CE , during the Middle Ages.

I also read about the Anglo-Saxons in England during that same period, who were some of the peoples that the Vikings “visited,” aka raided and forcibly took land to settle.  One of the pieces of medieval Anglo-Saxon literature that I read part of was Beowulf, which actually takes place not in England but in Denmark and recalls the ways of the Norsemen.  I bet Beowulf will be on the syllabus in my Intro to Medieval Lit class.  Wanna take that bet? 🙂

Then next week, on September first, I’ll attend my first class for Fall Semester 2016 as an auditor at MTSO, the Methodist Theological School in Ohio, which is in the next county north from where I live.  I’m auditing Intro to New Testament there.  I went to MTSO last year too and took Intro to Hebrew Bible (aka the Old Testament).

MTSO is a graduate seminary and the classes are quite demanding.  It also has a lovely campus and a working organic farm, which contributes produce to the school cafeteria.

I stayed overnight at MTSO in May 2015 for Summit on 16th UMC’s retreat for our Constructive Theology class that spring. There is an amazing prayer labyrinth at MTSO that adds a real contemplative aspect to time spent on campus.

Between the Ohio State Medieval Lit class and the MTSO New Testament class, I know I’m going to be doing a LOT of reading!

And add to those on-site classes at Ohio State and MTSO the courses that I’m taking online during Fall Semester at FutureLearn:

Let’s look at some of the classes they offer, at  FutureLearn courses  Here’s how FutureLearn describes themselves:

We offer a diverse selection of courses from leading universities and cultural institutions from around the world. These are delivered one step at a time, and are accessible on mobile, tablet and desktop, so you can fit learning around your life.

We believe learning should be an enjoyable, social experience, so our courses offer the opportunity to discuss what you’re learning with others as you go, helping you make fresh discoveries and form new ideas.

We’re a private company wholly owned by The Open University, with the benefit of over 40 years of their experience in distance learning and online education.

We have 94 partners from around the world. These include many of the best UK and international universities, as well as institutions with a huge archive of cultural and educational material, such as the British Council, the British Library, the British Museum, and the National Film and Television School.

I’ve already taken two FutureLearn courses this summer, A History of Royal Food and Feasting, which made me very hungry, and Magna Carta, in which the student discussions were really intriguing, in part because the students come literally from all over the world, so that their political and philosophical outlooks are quite distinct.  Tudor dishes from Royal Food and Feasting: 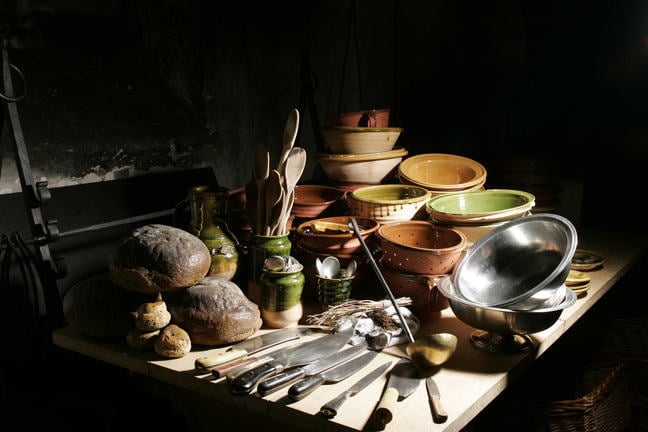 The FutureLearn classes I’ll be taking during Fall Semester this year include:  Medicine and the Arts;  Shakespeare;  Literature and Mental Health (for which I’ve already read at least parts of three books and engaged in lively discussion with others who will be in the class); Radical Spirituality (a history of the early Quakers, my spiritual upbringing and heritage);  Antiquities Trafficking and Art Crime;  and Hadrian’s Wall: Life on the Roman Frontier.

I think I have my (school)work cut out for me!

2 thoughts on “PJ Harvey and Back to School!”