Yes, I’ve broken my vow for Lent. Around Ash Wednesday I had vowed to stop posting on this blog and on Facebook until Easter, but I’ve been back on Facebook for a few days and now here, as well. I simply missed being able to communicate with certain friends who I can only access through social media. So I’m back! 🙂

I haven’t been reading posts either, for the most part, while I’ve been gone, so I have some catching-up to do. Meanwhile, let me try to remember what I’ve been up to during the time that I stopped posting….

Actually I can’t think of much, first because it hasn’t been that long since I quit posting, and second because yesterday while replacing a light bulb in a ceiling fixture I catapulted off the top of my dining room table and fell in a heap on the floor. I broke a couple of bones in my foot and did various injuries to soft tissue here and there! It is not much fun. 😛

I will find out Tuesday more details about what’s going on with my body and how soon I’ll be recovered. I’m kind of nervous about my prognosis because my trip to Iceland is coming up soon, and I need to be able to walk while I’m there!

Before that happened, though, I sat in on three sessions of Dr. Merrill Kaplan’s “Masterpieces of Scandinavian Lit” class at Ohio State while they were discussing the novel Troll by Johanna Sinisalo. 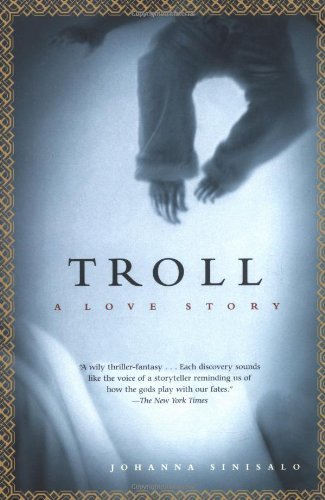 Troll is a work of contemporary fiction from Finland. Sinisalo creates a fictive existence for this supposedly well-known, although not often-sighted, mammal living in the northern reaches of Finland. She does this through entries supposedly written in scholarly journals and works of biology, as well as with poems, stories and myths that feature trolls. Some of the songs, poems and myths about trolls really do exist in Scandinavian culture, although not in quite the ways Sinisalo would have us believe.

Between these entries is the fascinating story of a young man’s discovery of a little abandoned troll being abused by a bunch of louts outside his apartment building one night as he reels drunkenly home. He is instantly attracted to the coal-black, silky-furred little creature and determines that he will keep it.

A goal more easily stated than achieved, especially given that full-grown trolls grow to be larger than human men and may or may not be violent, according to Sinisalo’s “sources.” The young man, who is called Angel, Mikael, Miguel or Michelangelo, is himself the object of desire of several men in the story as well as of one very young Filipina mail-order bride who lives in the same building with Angel and the troll.

The working-out of how Angel keeps, or tries to keep, this young forest creature in the apartment block in an atmospheric Finnish city is intriguing and suspenseful. The ending comes as a real surprise. I recommend this one.

I attended another SCA event while I was away from my blog. It was called Winter War Maneuvers, and I was caught on film as I played my harp:

The photo was taken by a photographer working for The Virtual Herald, Jerusha A’Laon.

That’s really about all that’s been going on here lately. Now that I’m laid up for a bit with my injuries,  I don’t expect that I’ll have lots of hot news to post, but then you never know. Meanwhile, it’s good to be back, and I look forward to catching up with everyone! 🙂