One of the Icelandic Christmas folk customs is that of the Jólakötturinn, or Yule Cat.

Sounds pretty harmless, but actually this cat is huge and will eat you if you haven’t gotten any new clothes before Christmas Eve! 😛

Here is a two-minute sprightly, wordless video illustrating the story:

I’m in an Old Norse study group that meets in person, if you are local to Massachusetts, U.S.A., which I am not, or online via Skype.

The study group is one of the brainchildren of William R. Short, author of Icelanders in the Viking Age: The People of the Sagas, one of my favorite books on the people who initially settled Iceland from 870 to 930 C.E.

Short also founded a group called Hurstwic, which started out as a Viking combat training program in Massachusetts U.S.A., but expanded into a study of almost all things Viking.

Why study Old Norse? Because the Icelandic sagas, eddas, and poetry were composed in that language, or else in Old Icelandic, which is practically the same thing.

Although I’ve fallen completely behind in the translation efforts of the study group, I’m still on the mailing list.

And I’m glad I am, because today Danny ‘Danymal’ Lee posted this fabulous picture.  He was standing in front of the lighted, magical Jólakötturinn statue in Reykjavik in January 2019:

I did, of course, only to protect myself from the Yule Cat. 🙂 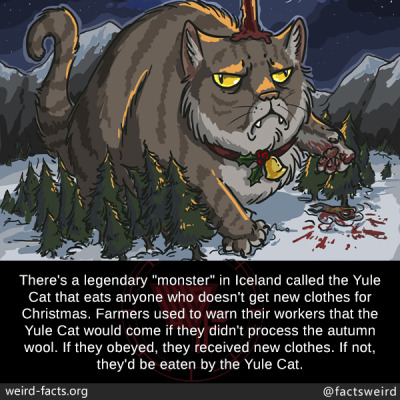